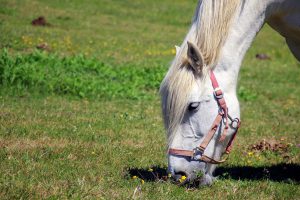 FWECs can be used to assess whether a horse has a worm burden that requires worming treatment and they can also be used to monitor the effectiveness of a particular treatment.

A faecal worm egg count should be a routine part of the worming program.

What is a faecal worm egg count (FWEC)?

A sample of your horse or ponies dung is viewed under a microscope to see whether any worm eggs are present in the dung.   FWEC are generally performed through the grazing season.

Do they identify all worms?

They only show up the eggs from the worms that lay eggs as part of their lifecycle. This does not include pin worm, bots and tapeworm.  In addition, they won’t be able to identify immature worms that are not laying eggs and cannot identify the encysted small redworm.

Why do I need to do this test?

The worms that cause disease in our horses have developed a resistance to all of the chemical wormers available.  Only 20% of horses have worms, however over 80% are still being wormed. Using FWECs instead of wormers means that your horse or pony will only have the chemicals that they actually need.

What does a clear result mean?

It means that there are no active adult worm eggs in the sample of dung that you have sent for analysis. It does not mean that your horse does not have worms! The worm life cycle includes many larval stages that are not detected from faecal worm egg counting and there are also worms that would not show up any way.

Faecal worm egg counts form part of a tailored worming program and advice should be sought about the results and when treatment is required.   It’s also very important that horses are still treated for encysted small redworm, tapeworm and bots as these infestations will not be detected by a FWEC.

Four faecal worm egg counts are included as part of your membership when you join the Horse Health Programme.

Send this to friend